Hi, to start this guide off I'd like to say that I'm trash, every ranked game I played I lost, and I play the game for fun.
I've been experimenting with Arachne support and it starts to look more and more viable; I'm posting this guide in hopes that others will try it and improve on my build. The build has two noticeable power spikes, when you build golden blade and some protections, and when you build animosity.

The build is focused around survival and utility, the damage comes late game from your HP pool.

TO HAVE A PROPER START:

The moment you spawn put a web at speed, and the large harpy camp behind it, then run into duos and put a web in the middle so it triggers when the minions come, run back to purple and help your carry, this will put you at level 2 and by the time you are in lane you will have your 3 and your 2, which lets you take out the enemy ADC on start. This method doesn't inhibit your solo, jg, or carry, all will reach level 2 just like they did before.

No boots, yes, no boots ever, your movement speed will come from other items that you will rush.

Make sure that you jungle often, go for oracles, the small camp near damage, and if able steal the enemy camps, this will put you online faster.

If playing with randos, throw your webs at the enemy, be passive, don't take too much damage early, you are already doomed to have a bad early game, don't make it worse by feeding, wait until you built full golden blade, then you can start being aggro.

If playing with someone in comms, be aggro! I know I said the early game is trash but if you and your carry can communicate well you can stomp the whole lane before the enemy duos hit lvl 10. 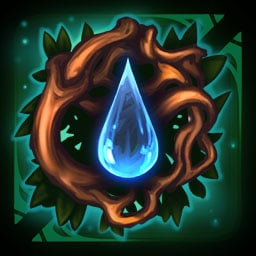 This item and all upgrades are only available to Assassins and Warriors.

This consumable deals 20000 True damage to Jungle Monsters around you. This only affects Monsters on your side of the Jungle.

Using this item applies a shield to himself and allies within 35 units for 100 Health + 12 Health per God Level for 3 seconds. Additionally, all allies take 20% reduced damage from Basic Attacks while the shield is active. Cooldown - 150s.

You are rushing golden blade, this will help you clear lane, and be your first movement item.

PASSIVE - All Basic Attacks will also hit enemies within a 15 unit radius of the target for 50% of the damage to Gods, Minions and Jungle Camps.

This consumable heals 250 Health over 25 seconds per use. Comes with 3 uses that are refilled if you enter the Fountain, sells for 0 gold.

Your 3 is your movement speed.

This is the core I go 90% of the time, the breastplate after golden blade is good protections and the 20% cool down will let you spam webs more.

Follow breastplate by shoguns, this will be your attack speed item and will help you when you rotate to mid.

Relic dagger is next up to give you the 17% movement speed and larger HP pool in preparation for animosity.

Look into getting chalice as early as you can, depending on how much you need the healing of course, I find myself getting it right after I build full breastplate. This will likely vary by play style.

This core puts you at 40% cooldown ASAP, gives you good enough attack speed to 1v1 and high protections.

The late game is where the fun starts, insane movement, stupid damage, 3k hp, and 170 protections both physical and magical.

That being said you will have to use your brain!

"But dipshit" I hear you say, "I'm playing Arachne just to avoid that one thing", trust me, its very simple.

Always build the core first. (Yes, that means golden blade which you will sell for toxic blade later)

Relic dagger and your other item of choice can come in any order you like/need, I prefer dagger first, it lets me deal more damage, lets me catch up faster and finish kills.

Buy animosity as soon as you can, the moment you have it, you are a problem for the whole enemy team, you can 1v1 a Hades, get ulted, kill him in ult, and come out at half hp. And that's without using your own ult or relics.

Here are some example full builds, and extra items that I use:

Sell golden blade for toxic blade the moment you are no longer needed to help your team clear lane, I buy elixir of speed as fast as I can late game, that is, if I'm doing well, if you are dying to the enemy Anubis the moment you come out of spawn clearly speed isn't your main issue.

AURA - ALL enemies within 25 units are dealt 20 (+1 Per Level) Magical Damage per second.

Toxic blade is always a good option. You don't need to clear lane for your team at level 20, and you can clear just as fast using abilities. The attack speed, health, and pen help a lot with animosity.

If the enemy team has healing exchange mystical mail for contagion.

If the enemy team is eating shit, you can buy blackthorn hammer.

PASSIVE - Getting a kill or assist on enemies causes you and allies within 70 units to gain stacks of energy. Energy stacks provide 2% Movement Speed, 2% Attack Speed, and 10MP5 per stack. Lasts 10s and stacks up to 6 times. Killing or Assisting an enemy God provides maximum stacks.

You can see a bit of a trend here, I think you get the point.

I prefer a balance of all skills, that being said:

You are trying to level up your spiders first, you will not believe how much damage they do, I find them finishing off kills quite often.

You are also getting the venomous bite for extra damage and the limited life steal(useless don't rely on, only food for getting some hp back from camps while disengaging)

The cocoon can be leveled up sooner if you are confident your ADC can back you up with the damage that you will lack, this will increase the stun length and speed to give your ADC a larger window to finish a kill.

Just some common gods that my friends and I fought.

Sobek is a special case, you can absolutely and utterly crush his dreams of ever being viable by throwing your spiders at him(which you do anyway to engage) his pluck which he will definitely try to use if he has it, will hit the spiders, and shatter his hopes and dreams.

If you are beyond the stage of mindlessly copying builds and not knowing what items do, you can obv build against those gods. Im too lazy, I like to hold leftclick and see funny spider woman get kills and make hissing noises.

Anybody who can destroy at level 2, strong emphasis on izanami, I think she is the best god to combo with in duos.

Magical jungle, yes, very much yes. Athena? So much yes. Unless you get a magical solo.

Heals and CC, yes, make the enemy regret having beads and all the CC reduction items because of how much CC your team has.